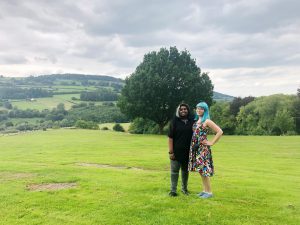 Ruckus Retreat is an interdisciplinary creative event co-founded by myself (Krish Jeyakumar, Account Executive at Dynamo PR). Before the event, Dynamo sponsored one residential place at the event so my colleague Izzy Hathaway, Dynamo’s Senior Media Executive, could attend.

Co-founded by myself and Rowan Ellis, the idea for Ruckus was born from conversations with other young creatives wanting an event that was community-driven, interactive, and non-hierarchical.

Ruckus was not about sitting silently in front of panels taking notes in a row – it was about creating, sharing, learning from each other, and making noise. Set in a 4* Welsh Manor house, Ruckus found the perfect home in Buckland Hall, within the hills.

Ruckus had four key elements, being:

What was surprising about Ruckus is the amount of people who discovered new talents and a new lease of confidence. People who didn’t feel comfortable speaking out on the first day ended up performing in the Open Mic on the last evening. People who were die-hard writers ended up spending time in the portraiture classes. Being in a non-hierarchical, supportive environment meant that people felt comfortable enough to explore.

When browsing #RuckusRetreat on Twitter and Instagram, it almost feels surreal that something dreamt up by a duo of 20-somethings actually did something to change lives.  Seeing folks saying that one of the turning points in their lives was ‘a wonderfully healing poetry workshop’ at Ruckus, and ‘[they’ve] come out of #RuckusRetreat with a plan for a play, confidence in pursuing projects and useful life info’ is unbelievable, and it really does push that whole ‘be the change you want to see in the world’ stuff.

The workshop leaders that presented at Ruckus covered a range of creative disciplines ;

Sanne Vliegenthart works in the world of books and publishing – from her popular YouTube channel to her work at Penguin Publishing. Sanne speaks both online and in person about productivity, literature, and creative careers.

Bridget Minamore is an award-winning poet and performer, who has shown her work internationally at festivals in Italy, Poland and Canada. She has been chosen as one of the 40 Stars of Black British Literature and was the first woman to be a lead tutor for the Roundhouse Poetry Collective.

Leena Norms is queen of the side hustle – with a popular YouTube channel, two brilliant podcasts, and a full time job in publishing. Leena ran workshops on topics such as imposter syndrome, self-employment and time management to help find the creative balance in your life.

Sammy Paul is a director and writer whose short films including ‘Blue Sushi’ and ‘Playground’ have been watched over a million times online. His films have been screened at international festivals in the UK, USA, and Canada.

Soof Andry is an Art Lecturer at Ravensbourne and Artist-in-Residence at Camden Arts Centre. Soof’s art, publications and work have been showcased at institutions globally including Tate Modern, Tate Britain, and the Parsons School of Design.

​Olivia Dolphin, a writer, poet, and event organiser, will be running our open mic on the final night of the retreat. Olivia is the Editor of the Wizards in Space literary magazine and will also be running a pre-open mic workshop in confidence coaching and overcoming stage anxiety.